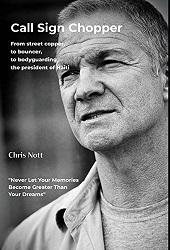 An Evening with Chris Nott.

Chris Nott is the Author of Call Sign Chopper From street copper, to bouncer, to bodyguarding the president of Haiti.

Two years later Chris’ world is shattered when the father he idolises deserts the family leaving him to help support his mother and younger brother. He quits school with no qualifications but miraculously finds a job as a clerical assistant with the Ministry of Defence, hoping that Martinis and Aston Martins, will soon follow.

Chris quickly realises however, that clerical assistants never get to be secret agents.

One evening, a chat with a local copper convinces Chris to join the police. Twenty-six years of active service follow until his career is cut short by a car accident which leaves him with a broken neck. Medically discharged from the police but still longing for adventurous work, he takes a job as a bouncer.

City centre violence is becoming headline news, and the BBC comes calling looking for bouncers like Chris to star in a new documentary series called, ‘Muscle’.

While filming ‘Muscle’ he’s sent to LA to train as a weapons carrying bodyguard. Impressed by his skills, the organisation invites him to join an elite team of mercenaries tasked with keeping the president of the impoverished Republic of Haiti in power.

Follow Chris’s remarkable journey from the streets of Bristol to the land of Voodoo, violent revolution and the ever-present spectre of death.