Gill and her husband moved from London to Backwell in 1980 and since that time have lived in four different houses in Backwell. Gill’s father had the sort of job which involved frequent moves and Gill and her sister went to many schools in different parts of the UK. This nomadic childhood led to Gill’s search for familiarity and the forming of roots and accounts for her great love of Backwell and its residents.

Gill has always been a joiner of organisations and loves meeting new people and embarking on new challenges. Over the years she has been involved in numerous activities, she was the chairman of the local NSPCC and organised numerous fund raising events. She was group leader of St; Andrew’s ladies group for six years and spent another six years on Backwell parish council.

Gill supports the local church and helps with various activities with children from the junior school on special occasions especially on Christmas and Easter projects.

Gill is a member of Backwell tennis club and has been the social secretary on two occasions, organising bbq’s, quiz nights, and skittles evenings and many more. Gill is a great animal lover and is particularly passionate about dogs. She was involved at Holly Hedge animal sanctuary as a volunteer, taking dogs for walks and also sitting and stroking dogs who need company and reassurance, however since Covid these opportunities have been withdrawn for the time being.

Gill is a member of the Cinnamon Trust which involves taking dogs out for walks for those people who, for various reasons are unable to walk their dogs themselves. Gill has been volunteering at St Peter’s Hospice Charity Shop in both Backwell and Nailsea for several years.

Gill trained as a school teacher after leaving school and has a degree in special education. She did some extra training to qualify to teach deaf children, she worked at the school for the Deaf in Westbury on Trym for twenty years. Towards the end of her career she trained as an assessor and worked at Weston College, she was involved in the training of teaching assistants who were apprentices, which meant lectures at college as well as part time jobs in schools.

As Gill has been so long associated with Backwell she feels very much part of the community, the schools, the churches, the tennis club, the bridge club, the charity shops, the parish council with all these connections over the years have given her a great affection for Backwell and its inhabitants.

Gill is a keen walker and loves the English countryside she is a member of the Rambling club and also of the HF walking club.

Gill is concerned about many local issues which have been mishandled. She is concerned about the number of houses constructed in recent years, that have been built on green field sites. The proposed closure of the recycling centre in Backwell seems senseless and the expense of clearing up the fly tipping which will be endemic, will be astronomical. 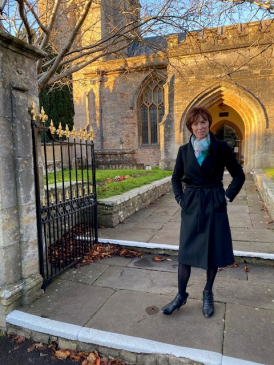