Jeff lives in Pill with his wife Mary, they have three children and seven grandchildren between them.  In the Autumn of 2021 he became a Parish Councillor after being returned unopposed.  It wasn't his first time in local government as he had been a Councillor for East Northamptonshire District Council for 15 years. He served as Chairman of the Council in 1988/89, he chaired the Environmental Services Committee for three years. Jeff also served as Chairman of the Swimming Pool Working Party which oversaw the largest capital project in the Councils history at that time, this provided the District with a new Swimming Pool which was badly needed for the community. An achievement which he is very proud of.

Jeff is an active volunteer for the Community Fridge, Repair Cafe, Foodbank Hub and has been recently filling in as a driver for the Pill Lunch Club.

He has always been involved in sport either as a player or supporter and is a massive fan of Bristol Bears where he is a season card holder.

He believes in being totally hands on and that you only get out of something, what you are prepared to put in and one of the practical ways he does that, is by having a regular surgery for people to attend if they need help or advice.

Last night I went to Abbots Leigh for a meeting about the 700 allotments that a company called Roots are intending to do in a field that is part of the Green Belt. As far as I can see there are far too many Planning issues to overcome to make it workable. 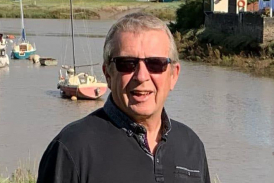