Michael was born and raised in Stamford, Lincolnshire but moved to North Somerset in 2019 for work. His background is in Youth Work and particularly in Youth Participation, having worked and lived in London for The Methodist Church implementing their Youth Participation Strategy. In 2019 he moved to North Somerset to take up a job as Youth Worker for Yatton Methodist Church.

Michael has Chaired various pressure groups, including the Methodist Zero Carbon Group. A position in which he achieved a divestment of £40 Million from all Fossil Fuel Companies in which the Church was previously invested.

Michael took an interest in politics at an early age, when at 10 years old he started reading about the formation of the Coalition Government. The first campaign he was involved in was Brexit in 2016 and has since campaigned in the 2017 and 2019 General Elections. As well as campaigning for friends in East Devon, North Devon, Lincolnshire, Bury St Edmunds and North Somerset.

He has a heart for local people and hearing their voices and was convinced to put himself forward for election upon seeing the plans for Clevedon Seafront (So he could object to them at every possible turn). He believes in first and foremost listening to people and taking the right course of action based off that.

Michael is an avid badminton player as well as being a lifelong fan of Ipswich Town football club. 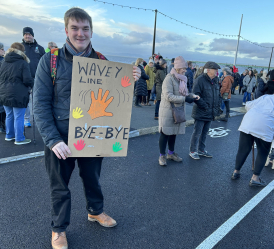